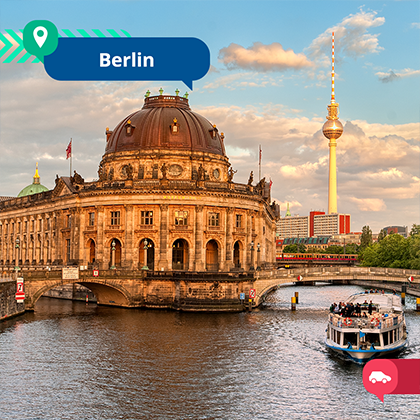 Top 5 European cities you should visit

We’ve rounded up the best weekend trips you should carpool to this time of year, including Amsterdam, Budapest and Prague.

Weekend trips to European cities are becoming increasingly popular among the Poles, who specifically favour places that offer something unique and less touristy. BlaBlaCar asked our expert teams in Amsterdam, Berlin, Bratislava, Budapest and Prague about what to see in their cities. Read their recommendations and begin planning your carpool! Amsterdam is one of the most attractive cities — a city of art, culture and design. The capital of the Netherlands is extremely picturesque with hundreds of canals and a well-preserved old town.

Museums
Our local guide is Kiki from BlaBlaCar’s Amsterdam office! When asked what the must-see thing was, Kiki replied without hesitation: the museums! She recommends:

De Pijp
After the museums, you might want to rent a bike and do what the Dutch do: ride along the canals! It should take you to De Pijp, one of the most vibrant districts. Originally inhabited by the working class, this part of the city today is a real cultural and ethnic melting pot. De Pijp is also full of fantastic restaurants, bars and cafes.

One of the most recognizable attractions in this area is Albert Cuyp, a market whose tradition dates back 100 years. You can check out more than 300 stalls, selling everything from vegetables and fruits, fish and meat to clothes and cosmetics.

Begijnhof
After some market shopping, you might want to take a rest at the Begijnhof. Here you can find a quiet courtyard and chapel surrounded by small houses. It used to be the headquarters for the Beguines, a group of unmarried religious women.

Where to eat
For lunch or dinner, Kiki recommends Hannekes Boom (Dijksgracht 4), where you can enjoy a delicious meal and live music. For those looking for a cozy atmosphere, you should try Winkel 43 (Noordermarkt 43). Don’t forget to try their apple pie!

Berlin is a true cultural melting pot, the capital of street art and alternative lifestyles. Our guide through this amazing city is Christian from BlaBlaCar’s German team.

Historical sites
According to Christian, you should start the sightseeing tour with Flak Tower, a bunker built in the shape of a tower during World War II to protect the city from aerial attacks. It’s an interesting monument, not found on most tourists’ radar.

Another important historical location is the Berlin Wall Memorial, giving overwhelming insight into Germany’s history. Make sure to check out the remaining piece of the Berlin Wall. Visitors should go to the Berlin Wall Death Strip, which can be more impressive than the popular Checkpoint Charlie, Christian says. An alternative to the memorial is the East Side Gallery, which is more for the art-seeking tourists.

Spandau Citadel
Spandau Citadel is one of the most underrated tourist attractions, Christian says. Built between 1559 and 1594, the citadel is one of the best preserved Renaissance buildings in Europe. Currently, you can find a museum there as well as exhibition halls and concerts. Nature lovers should also consider visiting Schlachtensee Lake. It’s a secret place, known only among Berliners, where you can take a dip or bathe in the sun.

Shopping
If you’ve come to Berlin to do some shopping, you should check out the popular Hackesche Höfe. The courtyard is sometimes full of visitors, but there are real gems waiting to be discovered.

An exciting day in Berlin isn’t complete until you visit one of the most popular bars in Kreuzberg: Club der Visionäre (Am Flutgraben), which sits on a canal. Fans of electro music will love the dance floor on the water and hot-out-of-the-oven pizza.

Although Bratislava remains in the shadow of the more famous Prague, you’ll be surprised to find a fascinating history in the Slovak capital. Our guide for Bratislava is Zuzka of BlaBlaCar’s Czech team, who knows this city like the back of her hand.

Historical sites
Zuzka says that when you’re in Bratislava, you must visit the Bratislava Castle, which is situated on a hill with a breathtaking view. Also worth seeing are the ruins of Devin, a medieval castle at the intersection of the Morava and Danube rivers. It is one of the most famous archaeological sites in Europe. Researchers have even discovered traces of Roman and early Christian buildings.

Another stop you must make is to the Slovak National Uprising Bridge, also referred to as “the building of the century”. The bridge is 431 meters long, 21 meters wide and spans the Danube. Locals often call this the UFO Bridge because of its resemblance to a spaceship. The UFO has an observation deck and a very nice restaurant. In good weather, you can actually see the Austrian Alps from 100 kilometers away.

Local eats
When you’re in Bratislava, you can’t forget to try the local delicacies! Zuzka suggests heading toward Zylinder, a restaurant in Hviezdoslavovo Square for some traditional fare. Those who prefer something more modern should try the Regal Rooftop for some burgers near Michael’s Gate, one of the city’s top attractions. You really can’t go wrong with a burger! Budapest is often cited as one of the most beautiful cities in Europe. The capital of Hungary is a captivating site with its amazing architecture, local cuisine and many attractions. Our guide in Budapest is János from BlaBlaCar’s Hungarian branch, who proposes an alternative tour of the city, away from the popular destinations.

Spas
Many tourists take a dip in the city’s famous spas. The best known are the Gellert or Szechenyi spas. But few people have heard of Veli Bej: a small cozy spa, whose roots date to the 16th century. It’s the perfect place to relax away from the noise and crowds.

Attractions
After checking out the spas and taking a bath, you should go for a walk through the streets of Budapest and check out the architecture. Looking for less-crowded places? Walk toward the Obuda district, which offers a charming square surrounded by Baroque flats. You should also see Gellert Hill, which overlooks the Danube River. At the foot of Gellert Hill is Rudas, a thermal bath that’s worth checking out as well.

Shopping
Fans of shopping will love Budapest for its plentiful flea markets. One of the most famous is Pecs in Varosliget Park. There’s a real retro atmosphere, with old vinyl records, jewelry and photographs. To make the weekend in Budapest even more memorable, you should hit up the Ice Bar (Váci utca 82), where sculptures are made of ice and drinks are served. Guests get special outfits to protect them against the freezing temperatures inside the bar.

Prague is considered one of the most breathtaking capitals in Europe. And we come back to our guide, Zuzka, who’s knowledge of Bratislava and Prague is never-ending!

Prague Castle
Zuzka says visiting the Prague Castle is a must. It’s the former seat of Czech kings and dates to the 9th century! Within the castle grounds, there’s also the Metropolitan Cathedral of Saints Vitus, Wenceslaus and Adalbert, which is situated within the castle, and the famous Golden Lane. It’s a row of small houses that were once built for castle guards. Writer Franz Kafka also called this home for two years.

Local eats
For lovers of traditional Czech cuisine, Zuzka recommends Naše Maso (Dlouhá 39), which is located in the former Jewish quarter of Josefov. Chefs create excellent meat dishes right in front of the customers. Don’t forget to complete your meal with a Czech beer! Anyone who wants a tasty breakfast should visit Café Savoy (Vítězná 5), where you can enjoy croissants inside a Renaissance interior.

Feeling inspired to take a trip to these cities?