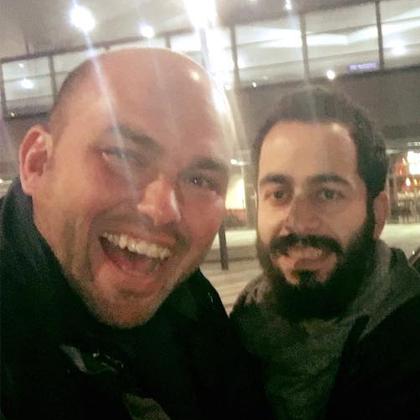 One of our members shares his favorite trip so far with three fellow ridesharers.

BlaBlaCar driver Attila recently shared a heartwarming story on Facebook about how an average trip for him from Germany to Hungary turned into an exciting carpooling journey. We caught up with Attila, and now we would like to share the complete carpooling story with you. We hope this puts a smile on your face!

Yesterday, I was supposed to make a solo drive home to Hungary from Frankfurt. Instead, I posted my trip on BlaBlaCar to see whether anyone was interested in sharing the ride with me.

Luckily, I found an awesome, fantastic, amazing group of passengers to travel with me instead of driving alone all night.

Let me introduce my passengers:

When I picked Georg up in Würzburg, Germany, I was surprised to see him using his phone in Hungarian. Afterall, he was a German without any Hungarian roots. Turns out, Georg had spent the past two years volunteering in a church community, where he perfected his Hungarian. He even understood the local jokes and slang such as “push the pedal to the metal.”

For a young guy, Georg had a great vision of the world. He was en route to Hungary to visit old friends from his volunteer days. He really loves Hungary!

Our next passenger was Daniel, a Hungarian who moved to Germany to find a better life. We met him in Erlangen, Germany, where Daniel has been able to find a job as a wall painter despite his computer programming education.

Life is better here, Daniel says, even though he’s working six days a week and living in the basement of his boss’ house. His boss treats Daniel like a son, and they always have dinner together.

Time has flown by so fast for 33-year-old Daniel — this is already his fifth year in Germany!

Aziz accompanied us on the journey in Austria from Linz to Vienna. Aziz’s friend had accompanied him to the train station, which was also our meeting point. When we greeted each other in English, I was impressed by Aziz’s English. It was really good. And when the friends said goodbye to each other in Arabic, I couldn’t help but ask Aziz where he was originally from.

Aziz said he was from Syria and traveled to Hungary on foot about three months ago. He showed me his documents to ease any concerns about traveling with him. But I wasn’t worried, I was happy to have met him and interested in learning more about his life.

Before arriving in Europe, Aziz told me he was an architect in Damascus, and his friend whom I met earlier was a math teacher. In an effort to leave Syria, his family had to travel on foot to Europe. His mother, unfortunately, couldn’t make it any farther than Turkey. One of his sisters ended up in Norway.

Even though people look at him differently sometimes, Aziz has found that people are very kind to him in Europe, especially Austria. He still hasn’t managed to find a job yet in Vienna, but I could tell he was optimistic about his prospects!

***
So what do all these people have in common? On first glance, not much. But through carpooling, Attila, Georg, Daniel and Aziz were able to connect and talk about their experiences with each other. We always look forward to hearing about our members’ rideshare experiences, and Attila’s was definitely one of them. Have you had an interesting experience recently? Let us know!