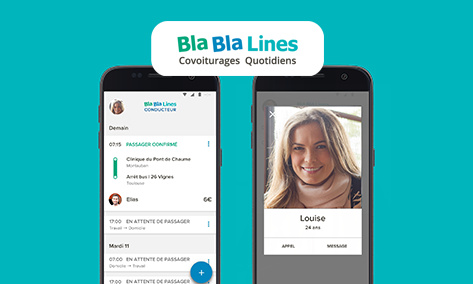 BlaBlaCar unveils a pilot version of its new app dedicated to daily commutes, tested from May 2 on two axes in France.

Building on the success of long-distance carpooling, BlaBlaCar continues to innovate with the launch of BlaBlaLines, a new app that enables commuters to share shorter-distance trips. In France, there are 13.5 million people who drive to work and back, but the average car occupancy on these trips is just 1.08 persons — making the daily commute ripe for innovation.

BlaBlaCar is launching the beta version of BlaBlaLines on Android and on two French axes — Reims to Châlons-en-Champagne (45km), and Toulouse to Montauban (50km). The product will be tested and iterated ahead of a wider rollout in France.

This solution offers great freedom to commuters who no longer have to depend on the calendar constraints of a colleague or a neighbour. Lines will develop organically as more drivers come online and popular routes emerge, with a coverage adjusting naturally to road density.

According to Frédéric Mazzella, BlaBlaCar Founder: “BlaBlaCar’s mission is to optimise the use of the millions of cars on the road with empty seats. Our platform was designed for long-distance journeys, but we are seeing a steady increase in shorter-distance trips offered on BlaBlaCar. It was, therefore, natural to create a solution that meets those needs specifically, to overcome the current hurdles to short-distance carpooling, and to develop its usage at scale.”

The beta launch of BlaBlaLines on Android is officially available on two axes with high potential: between Reims and Châlons-en-Champagne and — with the support of VINCI Autoroutes — between Toulouse and Montauban.

VINCI Autoroutes President Pierre Coppey says: “We are very pleased to support BlaBlaCar in the launch of this new app, which is a continuation of several years of collaboration fostering carpooling on motorways. Many commuters use the VINCI Autoroutes network every day. We were keen to introduce them to this innovative app and encourage them to change their habits by carpooling on their daily commute.”

The new service is also supported by ADEME, the French Environment and Energy Agency.

ADEME Mobility Expert Gabriel Plassat says: “Local communities have a key role to play in encouraging behavioural changes, in improving connections between public transport and carpooling, and in encouraging carpooling on daily commute. We are delighted to support BlaBlaLines in its dialogue and collaboration with public players.”

“To adequately address the commuting challenge, it was necessary to design an entirely new application from scratch and address commuters’ constraints and expectations,” Mazzella concludes. “With BlaBlaLines, we hope to write a new chapter in the history of carpooling! “